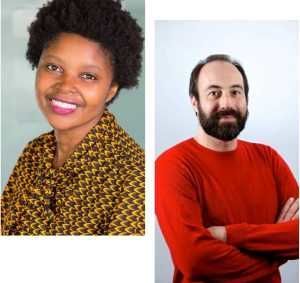 Please join us on Monday, April 5, at noon EDT for the next in our TEC Talks series, a conversation with Mutale Nkonde and Ryan Calo.

Few contemporary problems can be addressed by reference to a single discipline. Misinformation---a critical issue of our time---is no different. Join us for a conversation between Center for an Informed Public co-founder Ryan Calo, AI for the People founder and CEO Mutale Nkonde, Notre Dame Technology Ethics Center Director Mark McKenna, and Notre Dame-IBM Technology Ethics Lab Director Elizabeth Renieris on the importance of interdisciplinary teams to understanding and resisting misinformation.

Mutale Nkonde is an artificial intelligence policy analyst and founding CEO of AI for the People, a nonprofit creative agency that seeks to use journalism, television, music, and film to challenge the narratives around the assumed social neutrality of machine learning technologies. She is also the CEO and founder of Opps Management LLC, a management consulting agency that works with companies and nonprofits to help them reach their diversity and inclusion goals.

Ryan Calo is the Lane Powell and D. Wayne Gittinger Professor at the University of Washington School of Law. He is a founding co-director (with Batya Friedman and Tadayoshi Kohno) of the interdisciplinary UW Tech Policy Lab and (with Chris Coward, Emma Spiro, Kate Starbird, and Jevin West) the UW Center for an Informed Public. Professor Calo holds adjunct appointments at the University of Washington Information School and the Paul G. Allen School of Computer Science and Engineering.

Professor Calo's research on law and emerging technology appears in leading law reviews (California Law Review, University of Chicago Law Review, UCLA Law Review, and Columbia Law Review) and technical publications (MIT Press, Nature, Artificial Intelligence) and is frequently referenced by the national media. His work has been translated into at least four languages. Professor Calo has testified three times before the United States Senate and organized events on behalf of the National Science Foundation, the National Academy of Sciences, and the Obama White House. He has been a speaker at the President Obama's Frontiers Conference, the Aspen Ideas Festival, and NPR's Weekend in Washington. Full bio here.

To register for our TEC Talks series, please visit https://think.nd.edu/registration-tech-ethics/.

If you've previously registered for our series, there is no need to re-register.