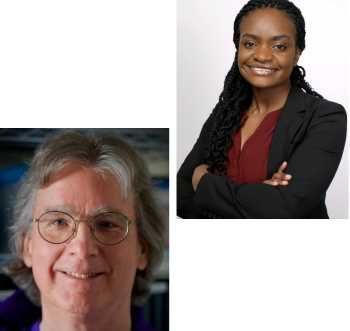 What Do We Value? The Ethics of Tech Accountability

Founder and Principal of Earthseed

Ifeoma’s health misinformation initiatives have been lauded by the World Health Organization, the Washington Post’s Editorial Board, and the New York Times. Ifeoma is on the First Draft, Inc. Board of Directors. She is also a member of the Brookings Institution’s Transatlantic Working Group on Disinformation and is a member of The Washington Post’s Technology 202 Network.

Projects Ifeoma has taken on include: leading legislation with California State Senator Connie Leyva to allow every individual in the state to share information about discrimination they have faced on the job, even after signing an NDA; leading research and an initiative funded by Omidyar Network that will provide tech whistleblowers with needed resources; serving as a juror on the Google News Initiative Covid-19 Vaccine Counter-Misinformation Open Fund; advising a United Nations agency on coronavirus vaccine messaging and vaccine misinformation management; serving on the Selection Committee of the University of Washington’s Center for an Informed Public’s Award for Excellence; and advising large nonprofit organizations on addressing misinformation and engagement with large tech platforms.

Author of the New York Times bestseller, Zucked: Waking Up to the Facebook Catastrophe

Roger McNamee is the author of the New York Times bestseller, Zucked: Waking Up to the Facebook Catastrophe, which documents his journey from mentor to Mark Zuckerberg to critic of Facebook. Zucked was the cover story in TIME on January 28, 2019.  Since April 2017, Roger has been engaged – with many others – in a campaign to address the dark side of social media and reform the tech industry.

Roger began his career in 1982 at T. Rowe Price Associates, where he managed the top performing Science & Technology Fund and co-managed the New Horizons Fund. In 1991, he launched Integral Capital Partners, the first crossover fund (combining later stage venture capital with public market investments), in partnership with Kleiner Perkins Caufield & Byers and Morgan Stanley & Co. In 1999, Roger co-founded Silver Lake Partners, the first private equity fund focused on technology businesses. In 2004, Roger and his partners launched Elevation Partners, an investment partnership focused on the intersection of media and technology. U2’s Bono was a co-founder of Elevation.

Roger has written opinion pieces for the  New York Times, Washington Post, TIME Magazine, Wired, the Financial Times, The Guardian, USA Today, Los Angeles Times, and San Diego Union-Tribune. He is a frequent guest on Squawk Alley on CNBC and on Ali Velshi’s show on MSNBC. Roger was featured in three documentaries: Frontline: The Facebook Dilemma, The Great Hack, and The Social Dilemma. He was a technical advisor to HBO’s Silicon Valley for seasons 2 through 6.

Roger holds a B. A. from Yale University and an M.B.A. from the Amos Tuck School of Business at Dartmouth College.